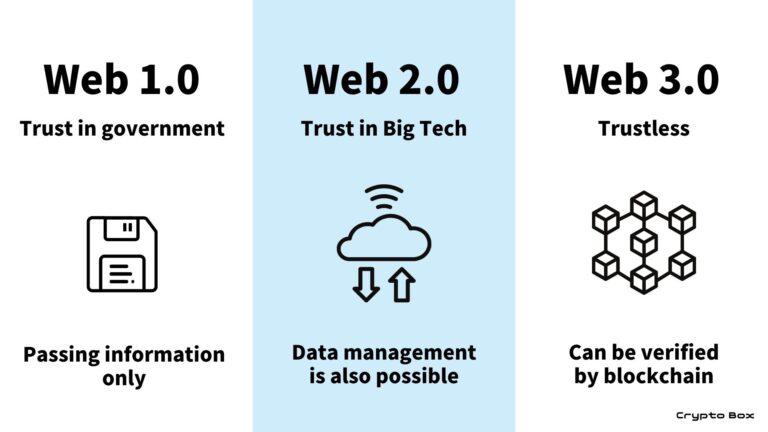 What is Web 3.0? How will it change the internet? I use simple diagrams to explain.

In a nutshell, Web3 is the era of “an Internet not dominated by big companies”. In other words, it’s the era of an Internet for users, and by users. Or…

Something that “reduces trust and increases truth.” Not very clear, is it? So, let’s start with a brief understanding of the current Web 2.0 and the Web 1.0 first. (Web 3.0 and Web 3 mean the same thing)

The Internet came into general use in the 90s to early 2000s. At that time, the Internet was a one-way street where people read text and exchanged emails. Websites were called “home pages” and only a small number of people sent out information. Internet connection speeds were so slow that when you wanted to view an image, you had to do something else to kill time. This was the era of Web 1.0.

Since then, the Internet has become “always connected” and its speed has increased. This made it possible to enjoy high quality photos and videos. In January 2007, the first iPhone was released and smartphones became popular all over the world. It made the internet more accessible and allowing everyone to share information through blogs, Facebook, Twitter, Instagram and You Tube. This is the current Web 2.0 era.

In the “Web 2.0” era, when the Internet has become an integral part of our lives, there is a big problem. The concentration of the world’s personal data in the hands of companies such as Google (Alphabet), Apple, Facebook (Meta) and Amazon raises privacy concerns. And there is the security issue of personal data being concentrated on the servers of one company, making it vulnerable to cyber-attacks.

Blockchain is the solution to these problems. In a nutshell, blockchain is a technology that makes it “extremely difficult to rewrite data”. Since computers around the world manage the data in a Decentralized computing, it is impossible for fraud to take place and the system will not suddenly go down. Cryptocurrencies such as Bitcoin, and NFTs, are based on this blockchain technology.

In the age of Web 2.0, when you shopped or sent money over the internet, you had to go through “banks”, “credit card companies” or “payment agents”. International money transfers were often expensive and time-consuming, and you had to withdraw the money from your bank before you could spend it in your own country.

In the age of Web 3.0, everyone will be able to send “universal money” to each other instantly (Peer to Peer / P2P). If you have already traded or sent Cryptocurrencies or used MetaMask, you are already familiar with this world.

The Internet in the Web 3.0

Until now, to use web services such as Facebook, Twitter, Instagram, etc., you needed to register and log in with an ID and password. It’s quite a hassle to manage ID and password for each service. And by registering your personal information with each service, your behavioral history and purchase history will be kept as data, and your information will be converted into “money”. This is because with personal information, it is possible to make money from advertising. As a result, the service providers (plat formers) focus all their efforts on attracting and retaining more and more users.

In addition, providing a service on a platform that attracts such a large number of users requires a “fee”, which can be too heavy (for example, Apple charges up to 30% for in-app purchases).

In contrast, the Web 3.0 era will see the emergence of “decentralised applications” (DApps) based on blockchain technology. These are services that can be easily accessed by simply plugging in a wallet, such as the previously mentioned MetaMask. It is your responsibility to manage your wallet and be careful when connecting to services, but once you get used to this, you will find services that require you to log in with an “ID and password” to be “troublesome”.

One of the main features of Web 3.0 is “trustless”. This is because Web 3.0 is based on blockchain technology, which is programmatically driven, so it is impossible to erase or rewrite inconvenient data. Web 3.0 is also characterized by “Verifiablity”. This means that anyone can verify the data on the Internet.

The era of Web 3.0 is about to begin all over the world. It will be interesting to see what services emerge and what organisations will succeed.